Here’s a drawing by my old friend Reg Eldridge – painter, cab driver and jazz aficionado – who’s just turned up his toes at the age of ninety-seven. The drawing was made as a student at St Martin’s, after the war.

Reg decided to become a painter after seeing pictures by John Singer Sargent in the Tate Gallery in the mid-1930s, and went on to paint throughout his life, producing some beautiful work. I was lucky enough to be part of the life drawing groups he ran in Brixton and Putney in the 1990s, and his passion for observation, draftsmanship and working from the model had a big influence on the direction my work has taken since then. He gave me advice (some of which I took) and a great deal of encouragement. More recently he gave me his easel.

After ill health forced him to give up painting some years ago, I asked Reg if he missed it, and he said that he didn’t – that of course he’d never produced anything that could compare to Sargent, but he knew he’d made the best work he was capable of, so had no regrets about stopping. I thought that was a pretty nice way to end. 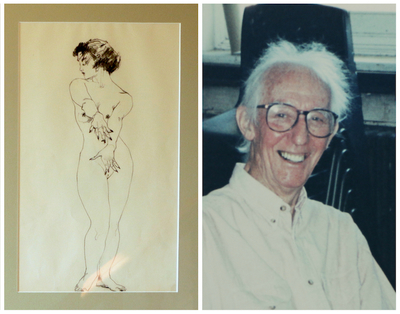