Studio session with Krystal and Gwen

Continuing my project Painting dance, my second Ballet Cymru studio session was with dancers Gwenllian Davies and Krystal Lowe, just before Christmas, and just after the final night of their 2016 tour.

Focusing on the improvisational approach explored in the earlier session with Anna and Andrea, we extended things a little by dropping straps from the ceiling to introduce a new dynamic to the compositions. (I installed the straps when building the studio in 2005, intending them to be used by nude models as support for particularly difficult all-day poses, though they were very rarely employed in this way. The main use they were put to for the first ten years was as an indoor swing for various friends’ children, until one, Lila, began inventing poses in them in 2015 – a brilliant idea, I think).

I made some sketches and shot a lot of footage of Krystal and Gwen holding positions they’d found through improvised dance, and I’m now working from these using the looped film technique described in my Kickstarter, whilst experimenting further with a range of materials and painting techniques.

One of the most exciting things about this project is not knowing where a session’s going to lead – which I’m just beginning to understand, and to feel more relaxed about. Working with Krystal and Gwen was great. They brought an extraordinary inventiveness and energy to the process, discovering new ways to use the studio space, and creating some beautiful poses. I’ll be posting some of the resulting pictures online as they are completed. 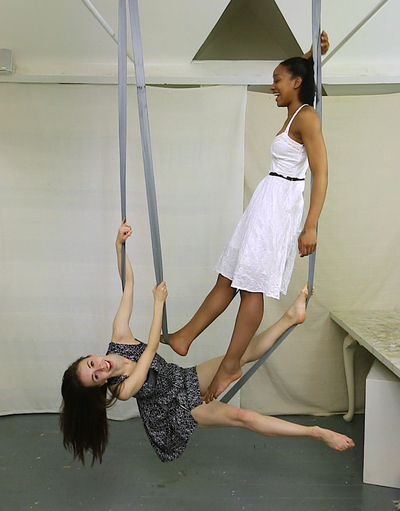