Getting into the final couple of weeks of my Kickstarter-funded project Painting dance, and reflecting on the remaining canvases I want to produce for the series.

The project has involved a great deal of experimentation – both technically, in terms of creative processes, materials and so on, and with regards to poses, picture composition and scale. I’ve run into a lot of problems, but have learned a great deal and developed a much clearer idea about the direction my work will take in the future – which will certainly involve further collaborations with dancers.

Looking forward to producing the final pieces, and to making up the second set of prints to be sent out to Kickstarter backers. Planning to have done this by mid-March.

Photo is from last week, during work on Gwenllian Davies and Krystal Lowe 12. 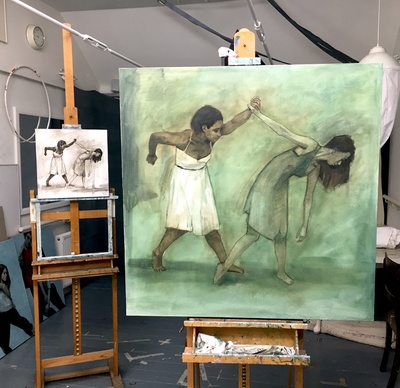